13 Minutes: The Cuban Missile Crisis is a micro game  that distills the excellent 13 Days: The Cuban Missile Crisis which is a distillation of the masterpiece Twilight Struggle.  I hope I haven’t lost too many of you with my meta discussion but I wanted to lay some groundwork with readers that maybe familiar with the two games that this games a lot to.  The game is a head to head strategic game of balance where players must make good and sometimes the least horrible choices, like it’s older siblings, but I think it still offers a fresh take on the premise.

13 Minutes packs a decent amount into a tiny box that contains only 13 cards and 26 cubes. The setup is quick and simple. Place a card face down between the two players. This will represent Cuba. Next players take a number of cubes from their 13 influence cube allotment and bid for the chance to decide who plays first. Once this is decide the players drawn two cards and take turns playing one card. A card can be used for one of two actions:

Cards are played either into the neutral area in between the two players or into that   players “sphere of influence” which is the tablespace between him and the neutral area where Cuba begins the game. The cards on the table become battlegrounds where the two players will place and remove cubes to fight for influence in this areas. The player with the most cubes on a battleground controls it and will score it at the end of the game. When cubes are placed onto a card, now a battleground, the battle ground moves. It moves towards the player when adding cubes and away from the player when removing cubes. Having a card in your sphere of influence can be good as it breaks ties if both players have the same number of cubes on a battleground but can also lose you the game if you have 3 battlegrounds with the same colour DEFCON symbol.

Players will go back and forth playing one card until they each can no longer draw a card. When each player has one card remaining you add up the following to determine who wins:

Unless someone has started a nuclear war by having 3 DEFCON symbols of the same colour in their sphere of influence then the player with the most prestige is the winner.

13 minutes comes in a sturdy little box and features the same graphic design as 13 Days. The font and historical photos are the same which makes a nice consistent look. The cars are well laid out and easy to understand. The quality is good. I really like the overall look of the game. 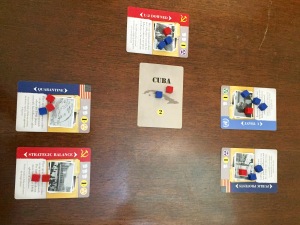 I will confess that it was going to take a lot for me not to enjoy 13 Minutes. I love 13 Days and Twilight Struggle is one of my top 3 all time favourites so the theme had me right away. If you don’t like political themes or the Cold War theme in particular then it may not appeal to you but I think it’s abstracted enough as to not be a major factor. I loved the mechanic of moving the battlegrounds back and forth as a physical representation of the political struggle you are playing out on the table. I think this game will make an excellent filler, from set up to take down you can play a game of this in under 20 Minutes easily. I found that I still had decent choices to make and there was a good amount of tension. Overall I think this is a must buy filler for Twilight Struggle or 13 Days fans that still deserves some consideration from people that might be turned off by those bigger games.

I am an avid board gamer. I also enjoy every conceivable type of music and a salsa (the dip, although the music is good too.) View all posts by The Gentlemen Blogger

Welcome To Die for Games' blog. Here we hope to provide our audience with written content about Board Games and the Board gaming community to complement our video reviews.
%d bloggers like this: